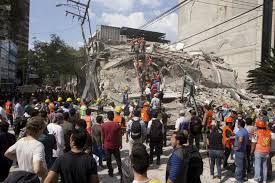 At 13:15 on September 19th, around noon, central Mexico was shaken by a deadly earthquake. At the time, I was in Española and first learned about the quake from Param Nirmal Kaur, CEO of IKYTA Mexico, who texted me as I sat in Tarn Taran Kaur and Singh’s sunroom during the TTEC meetings which KRI holds twice a year. Param Nirmal is not easily scared, but I could tell from her messages that she was shaken (literally), so I took to my BBC news app and tuned in to the stream of news which started pouring in. I found it a very disconcerting feeling to physically sit in such a peaceful environment while I was virtually attuned to the shock and anxiety of all the members of my community, not able to help.

It was an admirable thing to witness the speed and enthusiasm with which everyone in Mexico City responded. Within minutes of the quake, ordinary people had self-organised to clear rubble from collapsed buildings in an effort to rescue survivors trapped underneath. From across the border, all I could do was follow the intense traffic on my social networks and ascertain that all my brothers and sisters of the Kundalini community were unharmed, and were getting involved in the rescue work. Both Param Nirmal Kaur and Jai Raj Kaur, who is a member of the IKYTA Mexico board, spent all night as part of the volunteer brigades helping at the disaster sites. The members of Guru Arjan Ashram were helping out at a nearby collapsed building and later on at an emergency supply distribution centre in the neighbourhood.

At the end of the TTEC meeting that day I asked Dukh Niwaran Kaur and Haridass Kaur to help me shoot an impromptu video with the meditation to readjust the brain hemispheres after an earthquake, from the Survival Kit Manual, in Spanish. Here’s the link to the video on YouTube, for anyone who may find it useful:  Readjust the Brain After an Earthquake.

As the next couple of days went by, I got messages from Mexican yogis asking what we could do as a 3HO community. IKYTA Mexico sent word out, asking everyone to keep up, remain grounded and use their neutral, meditative mind to assist as part of the larger community we belong to.

Two days later, I’m finally back in my town. As I walked from the metro station to the ashram I saw a number of buildings that were cordoned off because of damage. There were also people staying in tents in a park, because it’s not safe to sleep in their homes. Siri Shakti Kaur, another of our board members, and Gurpurkha Singh, her husband, have started their own emergency supply collection at Guru Arjan Ashram for the people in Tepoztlan, a small town in the mountains which was also damaged. It’s the smaller, isolated places which are most vulnerable at this time and I’m  and I’m typing this surrounded by boxes with blankets, medicines, tools and so on. A dear friend and teacher, Gurudevi Kaur, has been preparing and serving meals at hospitals and other places where they might be needed.

Many of my friends from the global 3HO community have asked what they can do to help. We’ve started a fundraising drive through PayPal so that people from across the world can donate and contribute to relieving the suffering of the people who have been hit the hardest by this event. We will keep the account open for a couple weeks, and then the Mexican Kundalini sangat will decide collectively where the funds can be applied in a most useful and compassionate way. If you’d like to participate in this effort, please Donate Here.

United Sikhs and Sikh Dharma are also mobilizing a team in Mexico City to serve langar to the community.  Sometimes a hot meal served with love does much more than fill the stomach.  The alumni from Miri Piri Academy are embracing this seva.  To donate to the langar and read updates, Donate Here.

Also, I thank you for all your prayers and healing thoughts, for the victims of Mexico’s earthquake, and for all other beings who experience pain and suffering in this world, at this time. Sat Nam.