Yoga and Pain Management: An Ancient Strategy for a Modern Healthcare Challenge

The understanding of pain proposed by the International Association for the Study of Pain has remained unchanged since its first publication in 1979. It is defined as “an unpleasant sensory and emotional experience associated with actual or potential tissue damage, or described in terms of such damage.” Unfortunately, the neurobiological complexity of pain is not fully conveyed by this definition. Unpleasant stimuli are picked up by peripheral sensors, called nociceptors, which innervate the skin, deep tissues, and internal organs. Nerve cell conduits (axons), which can be myelinated (covered in a white insulating sheath) for rapid signal conduction or unmyelinated (which carry signals for slow, burning pain), transmit the stimuli through the dorsal horn of the spinal cord to the brain. While the brain’s somatosensory cortex is important for pain localization, a large network comprising the insula, anterior cingulate cortex, prefrontal cortex, and the thalamus is activated during acute pain experience. This was traditionally called the “pain matrix.”

However, contemporary scientific models acknowledge that pain is not a direct result of nociceptive input and the simple pain pathway highlighted above. Scientists know that our perception is critically determined by behavioral and psychological expectations and can be modified through learning. The most impressive and extensively studied example of this phenomenon is in placebo analgesics. In placebo studies, patients with agonizing pain report complete pain relief after the administration of a sugar pill that they are led to believe is a powerful painkiller. Since pain is an actively constructed experience, that can be modified through learning, some scientists propose an educational approach to treatment. The objective in this strategy is to shift the patient’s conceptualization of pain from a marker of tissue damage to that of a perceived need to protect the body tissue. This process is termed “functional pain literacy” and includes teaching the patient that pain and nociception (unpleasant signals) are not the same thing.

Despite advances in the field of educational psychology to modify our perception of pain, chronic pain is one of the most common conditions worldwide affecting 20 percent of the world’s population. It is estimated that it costs the United States between $560 to $635 billion annually to care for those with chronic pain, exceeding the healthcare costs associated with cardiovascular disease, diabetes, and cancer combined. These facts highlight the need for effective pain regulation strategies in modern medicine. Unfortunately, conventional pharmacological treatment, especially opioid painkillers, have a high potential for addiction. In 2015, 12.5 million people misused prescription opioids resulting in over 15,000 deaths and totaling $78.5 billion in economic costs. It is in the context of this current healthcare crisis that the Kripalu Center for Yoga & Health is hosting a chronic pain management conference in October 2017. This conference aims at bringing together healthcare innovators and practitioners to explore a new treatment paradigm for pain. Some of the speakers include Lorimer Moseley, PhD, a clinical and research physiotherapist who has advanced the concept of functional pain literacy; Lonnie Zeltzer, MD, an expert in the field of yoga for pediatric pain; Fadel Zeidan, PhD, a leader of mindfulness-based pain relief treatment; and Sat Bir S. Khalsa, PhD, who will address the psychophysiological mechanisms underlying the benefits of yoga for chronic pain management.

Indeed, there is strong scientific rationale for the use of yoga, meditation, and other complementary approaches in the treatment of pain. National surveys consistently find that 30-40 percent of the US population use complementary approaches such as acupuncture, massage therapy, yoga, and meditation to alleviate their painful conditions. Mindfulness meditation may be effective at reducing chronic pain symptoms by modulating a host of endogenous neurochemical systems. The result is a significant reduction in pain-related brain activity and activation in higher-order brain areas such as the insula. One of the first mindfulness meditation trials in pain studies found that long-term Zen meditation practitioners required significantly higher levels of noxious thermal stimulation to report similar levels of pain as age-matched controls. Although the Zen practitioners showed significant activation of “sensory processing” brain regions, they showed a reduced activation in areas of the brain that evaluate pain. 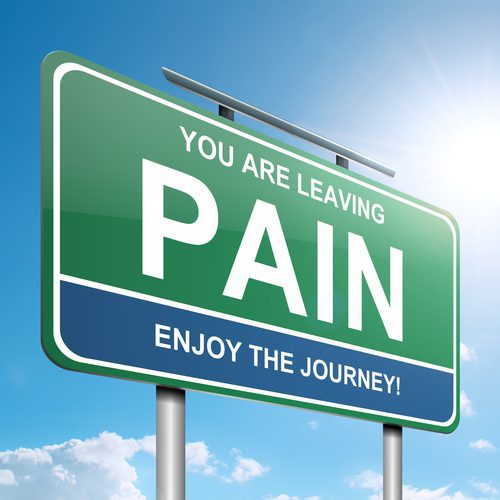 Similar results were observed in North American long-term yoga practitioners, in a recent study conducted at the National Institutes of Health, who tolerated pain more than twice as long as control subjects not practicing yoga. The yogis also had more gray matter in the brain insular region, which correlated with pain tolerance. In an examination of the ways in which pain was tolerated by each group, the yogis were found to use yoga-based cognitive strategies, such as acceptance and increased interoceptive awareness, and behavioral strategies, such as relaxation and slow breathing, whereas controls tried to actively distract themselves or ignore the pain, which are less effective ways to manage pain. These findings suggest that yoga practice can teach us new ways to deal with sensory inputs and modulate our reaction to them.

The research of Lonnie Zeltzer (one of the speakers at the Kripalu conference), provides more evidence supporting the use of yoga for pain regulation. For example, a small randomized controlled trial using Iyengar Yoga included 26 female participants (mean age = 28 years) with rheumatoid arthritis. The intervention consisted of 6 weeks of classes held twice per week at the UCLA Pediatric Pain Program yoga studio where numerous yoga props such as blocks, blankets, and bolsters were available to support subjects with a limited range of motion. The women attended 96 percent of the yoga classes, suggesting a high degree of feasibility of yoga therapy for this population. Furthermore, the yoga intervention group showed significantly greater improvement on measures of pain disability and general health and vitality scores when compared to control subjects not practicing yoga, but assigned to a delayed yoga treatment condition. Follow-up data after the end of the yoga intervention showed that those improvements were maintained after 2 months, suggesting the long-term gains of a yoga intervention.

These encouraging findings are emerging in the context of new developments in the field of pain psychology which suggest that pain is an actively constructed experience and can be modified through learning and mind-body behavioral strategies. We have seen how yoga can develop the skill in practitioners to modulate their pain response through cognitive strategies such as breathing, relaxation, acceptance, and increased interoceptive awareness.

The potential benefits of complementary therapies such as yoga are all the more important due to the current opioid epidemic. In fact, the guidelines released in May 2017 by the Food and Drug Administration (FDA) recommends that doctors look at nonpharmacological approaches, such as complementary therapies, in managing acute and chronic pain and, in 2010, the Office of The Army Surgeon General Pain Management Task Force Report listed yoga as a Tier 1 treatment modality for pain management.

Sat Bir Singh Khalsa, Ph.D. is the KRI Director of Research, Research Director for the Kripalu Center for Yoga & Health, and Assistant Professor of Medicine at Harvard Medical School. He has practiced a Kundalini Yoga lifestyle since 1973 and is a KRI certified Kundalini Yoga instructor. He has conducted research on yoga for insomnia, stress, anxiety disorders, and yoga in public schools, he is editor in chief of the International Journal of Yoga Therapy and The Principles and Practice of Yoga in Health Care and author of the Harvard Medical School ebook Your Brain on Yoga.