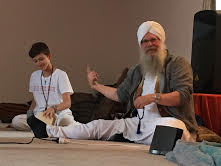 This was the first time that the Aquarian Trainer Academy members of Australia met to network, meditate together, and discuss topics that we felt were important.  Buoyed by our very positive collective experience the previous day during the teachers’ conference, yet also bringing with us the polarity of feelings that I am beginning to realise are just part and parcel of this journey of being Teacher Trainers. We began the day with a beautiful meditation led by GuruJivan Kaur.   Gurujivan Kaur was the first trainer in Australia and this year was one of the KRI Honorees of the Year.

Tarn Taran Singh then told us the story of how the Trainer Academy came to be beginning with Yogi Bhajan’s arrival in Canada and then America, of how very quickly he began sending people off to found ashrams around the world, of how the teachings were passed on and how the first “training” of new teachers was conducted by “trainers” who had far less knowledge than our Level 1 graduates have when they finish today. He shared with us the story of a group of trainers, each unique and established characters with a firm sense of the right and wrong way to do things, being effectively locked in a room by Yogi Bhajan and not allowed out until the first model of Level 1 training content was agreed upon!

And so it is today still – the call for trainers to come together in Trainer Forums to unite in a purpose, all part of the vision and mission of the Aquarian Trainers Academy – to spread the Aquarian spirit and to inspire not only Kundalini Yoga instructors and teachers, but leaders for the Aquarian age. We see these days just how clearly Yogi Bhajan perceived the future that is our present – the information age and how our whole systems have to come to a new way of processing just in order to keep up let alone thrive. For me personally, to witness Hari Charn Kaur and Tarn Taran Singh as representatives of that original group from the 60s, with their open-mindedness, an awareness that a new wind is blowing and times are still a-changing, and that a new generation is ready to take the wheel, was inspiring and a confirmation of the enduring and effective power of these teachings.

Our talks during the day centered around topics that are global and repeatedly come up. These included the need to revisit Level 1 and 2 training manual content, the need to revisit content with regards to inclusivity in the fields of gender, sexual orientation, race, economics, and geography, support for new teachers, ethics and effectiveness in online teachings and collaboration between training groups.

We gathered first along the lines of the levels of the academy.  To me, this way of delineating and grouping people is feeling like an outmoded way to divide people. As our Piscean models’ dysfunction, more and more there is a collective movement towards abandoning the traditional hierarchies in favour of “flat hierarchies”, “open space technology” and crowd-sourcing of ideas and skills. On both days of the forum, this was a powerful message for me: the old ways of organising ourselves are becoming more and more obsolete. There is such a wealth of unique talent amongst the community plus the technological ability to harvest it, that the way we do things is wanting to become more bottom up than top down. Those “at the top” are going to more gather, implement, focalise, and oversee actions that were initiated by a collective movement from the community at large (while also certain aspects of the teachings will never be negotiated). This in itself, and hearing everybody’s amazing wealth of understanding, knowledge, wisdom, and intuition when encouraged to speak on subjects that they actually WANTED to discuss (as opposed to being made to discuss them) has in fact caused a revolution in my own thinking, which I have brought home with me. I have shifted my thinking from Me, slogging away alone at my projects, to We – calling in the We to carry it and broadening the base from which things happen. Again – more bottom-up than top-down. The more people who come along the more collective consciousness is activated. And at the Yoga Festival you can really feel how the group consciousness carries it and makes personal processes possible that wouldn’t otherwise happen. The more people carrying it in consciousness, the bigger what can come through. I think of an analogy of a midwife holding the space for a baby to be born. The processes of the people are the labour!

Outreach to regional areas where people do not currently have access to Kundalini Yoga as taught by Yogi Bhajan® was another topic of discussion.  I want to know more and I see its importance. The vision and mission being to make these teachings which are so needed in these turbulent times available to as many people as want them and need them as possible. and thinking about ways to do this which cut across class, gender, sexual orientation, education and financial means.   Yoga Teacher Trainers working together in service to all.

Sat Nam Wahe Guru. Thanks God and Guru for the chance to be at both days of the forum. And thanks to Hari Charn for bringing the Forum to Australia and to Tarn Taran Singh for his presence.   I was uplifted by the spirit and guidance of this first generation and the openness to authentic discussion. I feel charged and inspired and connected through both time and space to the vision of Yogi Bhajan. I feel enthusiastic as a willing recruit to this army of light. And also, realistic about the polarities that arise and our collective willingness to include them.